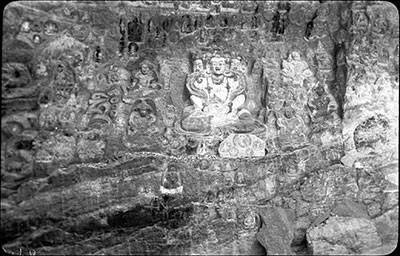 Other Information - Photographer: The inscription 'YN' in the negative relates to Evan Yorke Nepean, who was part of the Mission to Lhasa in 1936-37 and who took many photographs alongside Chapman. For this reason the image has been re-attributed as having been taken by Nepean. Nepean was a participant on the Mission to Lhasa and stayed in Lhasa during the period 6th September - 14th December 1936[MS 3/2/2005]

Other Information - Dates: This image has been dated by relating it to similar images taken by Chapman [MS 16/03/2006]

Other Information - Cultural Background: Pilgrims Would Circumambulate The Lingkhor (approx 6 Miles in total) And Then The Barkhor (often prostrating themselves all the way) until arriving at the Jokhang . [Marina de Alarcón ZF 1995.1]