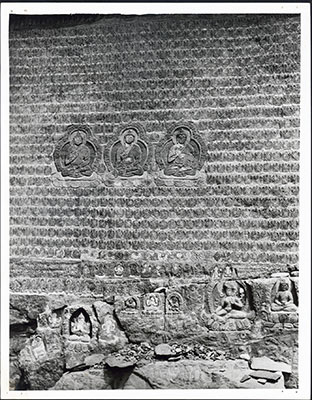 Buddha images carved into the rock face on part of the Lingkhor, the sacred road around Lhasa near Chakpori. The three Sakyamuni Buddha images in the centre represent, left to right, the Buddha in meditation, at the moment of enlightenment and preaching. The many smaller images carved in the rock face surrounding these central figures are also depicted in a variety of different mudra. Carvings of deities can be seen in the lowest band of carvings and one of Atisha or Tsongkhapa in the bottom left of the image has been carved into the rock face in the round. Other paintings and carvings can be seen in the bottom of the image extending out of the frame

Other Information - Related Images: It has been possible to identify this image as being originally referenced 'C.4.9' by cross-referencing the image with a print that appeared in the draft album made available to the PRM for the "Seeing Lhasa" exhibition in 2003. Images prefixed with 'C.4.' comprise a group of negatives containing images of soldiers, turning prayer wheel, horns and rock paintings, paintings, Dr Morgan and mission hospital, beggar with skull and drum, monks outside Sera, meat sellers and water tanks [MS 16/03/2006]

Other Information - Cultural Background: Pilgrims Would Circumambulate The Lingkhor (approx 6 Miles in total) And Then The Barkhor (often prostrating themselves all the way) until arriving at the Jokhang . The Carvings Along This Part Of The Lingkhor Have Been Commented On By Many Earlier Travellers To Tibet. There Is A Repetitive Carving Of Many Buddhas (based on the theme of The Thousand Buddhas) and 3 Slightly Larger Carvings Of S akyamuni Buddha in different mudra . [Marina de Alarcón ZF 1995.1]