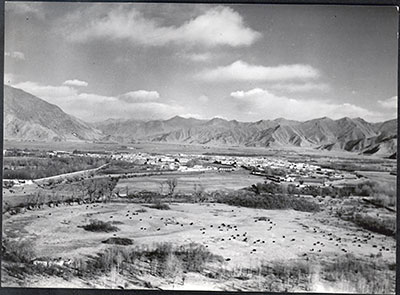 View of Lhasa taken from the south west close to Chakpori, also known as Medicine Hill. Many animals, possibly yaks, are visible grazing in fields across the bottom of the image. The main route from the south west into Lhasa can be seen, with a walled enclosure to the left of the road. This enclosed area contains many trees. A number of dwellings of indistinguishable type can be seen across the valley plain as it recedes into the distance. The mountains in the distance rise sharply from the valley floor.

Manual Catalogues - Caption in Chapman's hand-written list of negatives made whilst on the Mission to Lhasa, 1936-7 [See PRM Manuscripts Collection]: 'Lhasa city from Hospital Hill' [MS 16/03/2006]

Other Information - Related Images: Images prefixed with '3.' comprise a group of negatives including Mondo and telegraph officers, and views of Potala from Chakpori and other vantage points taken between January 25th - 27th 1937 [MS 16/03/2006]

Other Information - Cultural Background: This photograph was probably taken on January 26th - 27th 1937. During January-February the land is very dry and large numbers of yaks are put out to graze. Chapman wrote in the Mission Diary that during the winter period there were large numbers of yak caravans moving into and out of Lhasa [Diary Part XIII (January 15th - 31st)]: "Now that there is no grazing to tempt the pack-animals to dally by the way, and no rain to spoil their loads, there is much traffic on the trade routes. Any day you can see trains of mules, donkeys and yaks carrying the rough Tibetan wool down to India; and, approaching the city, loads of brick tea sewn in compact square packages, bundles of dried yak-dung for fuel, and striped yak hair bags of barley flour, which with the salt buttery Tibetan tea forms the staple diet of all the poorer classes." This print appears to be a copy of another print. The blacks in the image seem to be very dense [MS 3/2/2005]