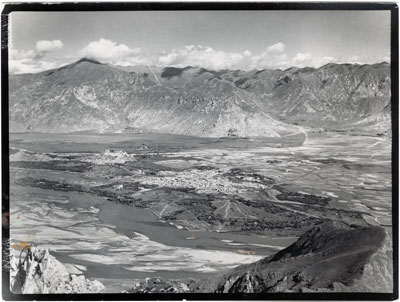 Notes on print/mount - There are many cropping and proof-reading marks on the back of the print, written in pencil. This includes the instruction "Square up, cut 1/16 [inch] from each side, and enlarge to 5 1/2 [inches] across". There are also instructions to "Trim off black" on all four sides of the image. '22' has been written in pencil in the top right hand corner on the back of the print. Other annotations should be seen on the object itself. The reference 'C.3.4' has been written on the back, which is part of the referencing system Chapman adopted for the images taken on the Mission to Lhasa in 1936-37. There is also a Chatto & Windus reference, C&W41074/18. Chatto & Windus published Chapman's account of the Mission to Lhasa, Lhasa the Holy City in 1938 [MS 2/2/2005]