Potala and Lhasa in early morning 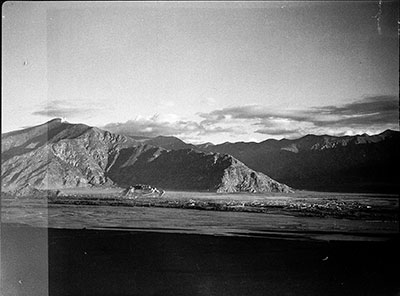 The Lhasa valley in the early morning with the Potala in the distance. High mountains can be seen rising steeply from the plain in the background with some low-lying clouds touching their peaks. There seems to be a slight double exposure on the left hand side of the image

In Negative - There are many small abrasions on the non-emulsion side of the negative in the top right hand corner. There is also a small black mark in the image, which may have been a deliberate intervention as it appears to have been placed over an object in the image on the top of the mountain. The number '3' has been printed on the negative on the left hand side [MS 2/2/2005]

Manual Catalogues - Caption in Chapman's hand-written list of negatives made whilst on the Mission to Lhasa, 1936-7 [See PRM Manuscripts Collection]: 'Early morning smoke over Lhasa' [MS 13/03/2006]