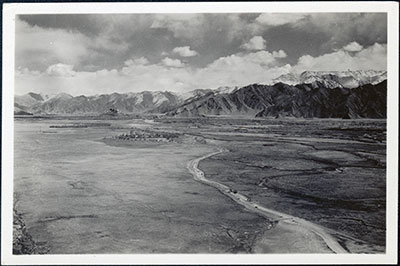 View of Lhasa valley taken from the north west with Lhasa in the distance, taken from Drepung Monastery area. The Potala and Chakpori can be seen in the centre of the image, whilst Norbulingka is visible close to Chakpori. A road cuts through the centre of the valley and people can be seen travelling along it. There are a number of parks and public spaces around the city, marked out by areas where trees are more densely planted. The river appears to be low, suggesting that this photograph may have been taken in the winter