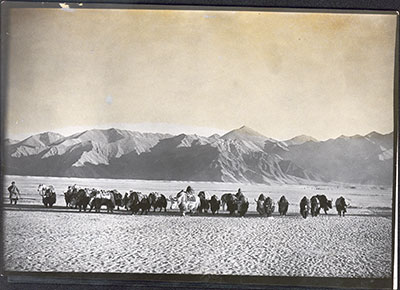 Notes on print/mount - The back of the print is covered with cropping and proof marks. The caption 'Yaks on Sera plain' is give, as is "Lhasa - transferable?". It also states 'Cut as indicated and reproduce facsimile'. There is an instruction to make a significant crop of 9/10" on the right hand side. This would crop the image to the yak on the extreme right and remove the open space on this side of the frame, centring the line of yaks and herders across the print. '28a' has been written in pencil in the top left hand corner on the back of the print. The reference '9-4' has been written on the back of the print in pencil [MS 28/1/2005]