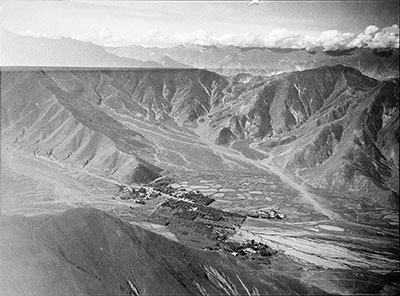 An aerial view of the Dekyi Lingka, where the Mission under Sir Basil Gould stayed, and Kundeling in whose grounds the residence was situated. The negative has been double exposed

In Negative - There are many abrasions at the top of the right side of the negative. The number '9' has been printed on the negative on the bottom left hand side [MS 28/1/2005]

Other Information - Related Images: Images prefixed with 'C.3.' comprise a group of negatives containing images of Lhasa and Dekyi Lingka, especially ‘air views’, as well as two images of the Ngagchen Rimpoche mounting his horse, apparently at the Dekyi Lingka. This has enabled dating of the image to the period August 31st - September 2nd 1936. These were hectic days for the Mission, and it is notable that the first images in this sequence identify the views as 'early morning', indicating how Chapman would go on long journeys into the surrounding hills even before the other Mission members were fully active for the day. At times this caused problems as he was apparently prone to going too far and forgetting the time. This image is a good visual marker of this aspect of Chapman's character and behaviour which seems sometimes to have set him apart from the other members of the Mission. Chapman has also put this image in a sub-set of photographs in his handlist titled 'City and People' [MS 13/03/2006]