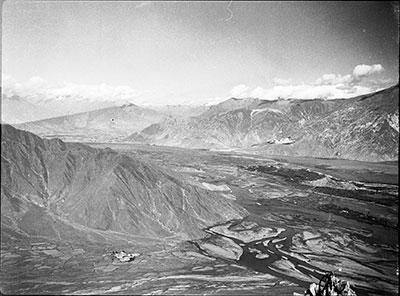 View of Lhasa valley. Sera Monastery can be seen in the mountains in the background, whilst another monastery can be seen in the foreground in the lower left of the image. This photograph has been taken from a mountain overlooking the valley and gives a good topographical perspective. There are many cultivated fields on the left hand side in close proximity to the monastery and the Kyichu river. The vegetation and the cultivation sites appear to be lush.

In Negative - There are many abrasions on the negative at the top and bottom of the right hand edge. The number '5' has been printed on the negative on the bottom left hand side [MS 28/1/2005]

Manual Catalogues - Caption in Chapman's hand-written list of negatives made whilst on the Mission to Lhasa, 1936-7 [See PRM Manuscripts Collection]: 'Ditto [Air view Lhasa City] across to Sera' [MS 13/03/2006]