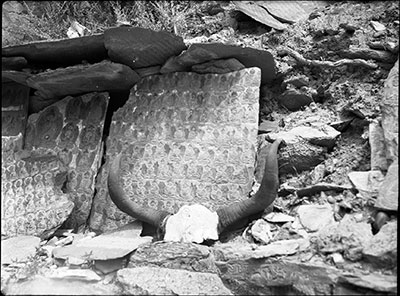 In Negative - The negative has number '5' printed on it. This refers to the fact that this was negative number 5 in the series identified as 'C/4' in Chapman's handlist of images taken whilst on the mission to Lhasa [see PRM Manuscript archive]. [MS 17/3/2005]

Manual Catalogues - Caption in Chapman's hand-written list of negatives made whilst on the Mission to Lhasa, 1936-7 [See PRM Manuscripts Collection]: 'Horns and rock with paintings' [MS 13/03/2006]

Other Information - Cultural Background: The skull and horns probably come from a yak or drong , wild yak [TS 21/1/2005]

Other Information - Related Images: This image is one of a group of negatives prefixed by the figure 'C.4' by Chapman [see handlist of mission photographs in PRM Manuscript Collection]. This group contained images of soldiers, people turning prayer wheels, rock paintings, Dr Morgan and the mission hospital, a beggar with a skull and drum, and many scenes in and around Sera monastery, including monks outside the monastery, meat sellers and water tanks. They all seem to have been taken during September and early October 1936. However, this image also relates to a group of images taken on the Lingkhor that seem almost certainly to have been taken on September 8th 1936 [MS 11/8/2005]