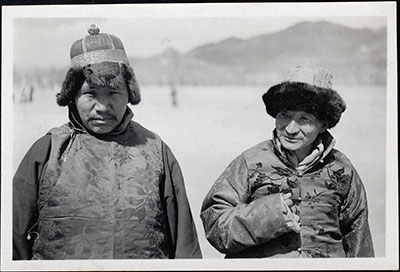 The Tibetan Trade Agent of Gyantse, right, with a local abbot. They are both wearing clothes made of silk and brocade, with fur linings. Their hats are also fur-lined and the hat of the abbot on the left appears to have a top feature made from lots of small glass beads. The town of Gyantse can be seen in the background, out of focus

Notes on print/mount - All three of the contact prints of this image have '640' printed on them in red ink, suggesting that they were made as multiple copies at the same time. They are all printed on velox paper with the brand name 'Velox' enclosed in an oval border [MS 1/2/2005]

Other Information - Related Images: Other images within this sequence prefixed with 'F.' comprise a group of negatives containing images of Gyantse, Lhasa band, officials receiving and sending off members of the mission, Chaksam ferry and journey to Lhasa.

Other Information - Photographer: It is possible that this image was taken not by Chapman but by another photographer, possibly Major Finch, who was made the new Commander of the Gyantse escort in November 1936 and who visited Lhasa for Christmas and New Year, departing on January 2nd 1937. 'F' in this case, therefore, may refer to Major Finch, as the sequence of images suggests a very brief stay in Lhasa around the New Year period, followed by a return to Gyantse. In this case, according to the order of images taken, this image would have been taken before departing for Lhasa. Chapman asked other members of the Mission to use his additional cameras at times, and/or acquired images from them that they took for themselves to include in the Mission collection. It was his habit to identify Nepean's images by inscribing the negative with 'YN' and this may explain the use of 'F' scratched into the negative in this case [MS 7/3/2005]