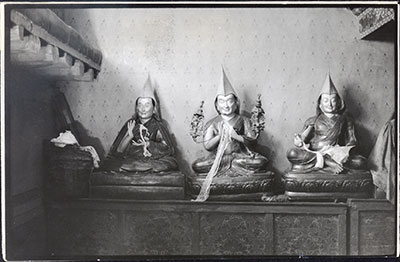 Three partly painted bronzes of Gelugpa lamas in Gautsa Monastery. Behind the statues repeating images of Buddha can be seen on the wall fresco. The images are placed upon wooden chests, which have been painted decoratively. Two shelves can be seen on the right and left side walls of the alcove containing the images. The shelf on the left has a textile cushion on top, whilst that on the right has been highly decorated. A box can be seen in the left hand corner of the alcove with a bowl on top containing khatak or offering scarves. All the images have had white offering scarves draped over their hands. A piece of discoloured cloth can be seen on the extreme right of the image

Notes on print/mount - The print has a copy editors paper stuck to the back for transferring crop and proofing instructions to the front of the image. These include the dimension "2 3/8 x 3 3/4", the caption 'Images in Gyantse Monastery' [see below] and 'H' written in red crayon. On the back of the print there are many copy editor's instructions including the instruction 'Cut as Facsimile' and cropping marks at both sides of the image, most significant of which would be the instruction to crop the image on the left at the point where the two walls meet. '8 - 4 1/2' has been written in red crayon. '48a' has been written in pencil in the top left corner. The reference number 'O/H/17' has been written on the back of the print in pencil and this number seems to relate to the system Chapman employed for cataloguing his images during the Mission to Lhasa in 1936-37 [MS 28/1/2005]

Other Information - Related Images: A group of negatives prefixed with 'H' that contain images of the route from Lhasa including Phari, Gautsa, Gyantse, all of which seem to have been taken in late February - early March 1937. This photograph, however, seems to have been taken in Gautsa rather than Gyantse [MS 10/03/2006]

Other Information - The greater the number of images of the Buddha represented, the greater the jinlap , which denotes blessings and auspiciousness which accrue to visitors to this place [TS 1/2/2005]