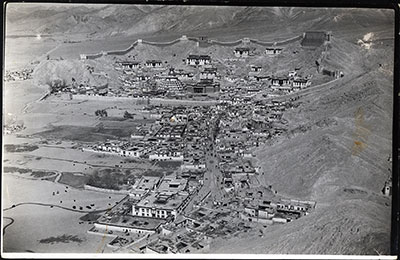 View of Gyantse showing Kumbum, the great chorten and the Palkor Chode Monastery. There are also good views of the whole length of the walls surrounding Gyantse. This photograph seems to have been taken from the Dzong or fort on the hillside outside the town. The main routes into the town are clearly visible, as are the town boundaries and the cultivated fields on the right of the image. The main road in the town is clearly visible and people can be seen walking. The fields on the outskirts of the town are dry and many have yaks and other animals grazing in them. A caravan of horses can be seen under magnification just below the centre of the image on the left

Notes on print/mount - The back of the print is covered in crop marks and the instruction to enlarge the image to 9 1/2" (240 cm). This indicates that the crop marks were not publication instructions and may relate to the production of the official Mission album. There is also a caption for the image, which has been partly erased, which reads "Gyantse town and monastery [illegible] from summit of the [erased]'. There is an instruction to crop the bottom edge of the image by 1/2". '6' has been written in pencil in the top left hand corner and '8 - 5 1/4' in red crayon down the right hand side of the print. The Chatto & Windus reference 'C&W41074/18' has also been written in pencil on the back. There is a reference number, which is similar to those used by Chapman for images taken whilst on the mission, but this has been erased and thus is it not possible to identify this image precisely [MS 28/1/2005]

Other Information - Dates: This photograph seems to have been taken during the winter as the fields are very barren, especially in comparison with the lush vegetation visible in 1998.131.210 taken from the same vantage point. This suggests that the image was taken on the return journey from Lhasa in February - March 1937. Chapman describes an earlier visit to the dzong to take photographs in the Mission Diary for August 15th 1936 and in his book Lhasa The Holy City [London: Chatto & Windus, 1938; reprint, London: Readers Union Ltd., 1940, pp.54-55]. [MS 28/1/2005]