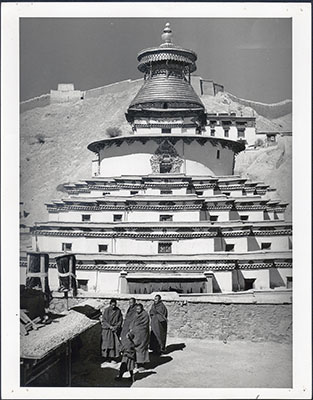 A group of monks, four adults and boy, standing outside the Great chorten at Gyantse, known as the Kumbum. The tiers of the structure dominate the image, rising up to the great finial. The highly decorated window lintels can also be seen. There is a very good view of the metal 'umbrella' at the top of the chorten. In the background, the hills surrounding Gyantse can be seen as well as sections of the town wall on top.

Other Information - Dates: This photograph seems to have been taken on the return journey from Lhasa in February - March 1937. Chapman describes an earlier visit to the dzong to take photographs in the Mission Diary for August 15th 1936 and in his book Lhasa The Holy City [London: Chatto & Windus, 1938; reprint, London: Readers Union Ltd., 1940, pp. 54-55] but he does not describe seeing the Kumbum at close quarters en route to Lhasa in 1936. [MS 28/1/2005]