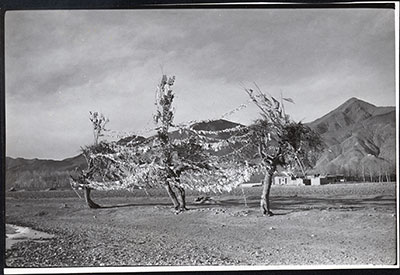 Prayer flags on trees near Gyantse Bridge, including large prayer flags attched to their tops. Possibly Gyantse fort in the background in the right of the image. Low mountains are visible in the distance. The river's edge can be seen in the bottom left hand corner of the image.

Notes on print/mount - There are a large number of cropping and proof marks on the back of the print. '8b' has been written in pencil in the top left hand corner. The print is a 'Facsimile' according to the notes on the back. There are also instructions to crop the image down both the left and right sides. These crops would remove the waters edge on the bottom left hand side and the straight ridge of the mountains in the background on the extreme right . The reference 'O-E-13' has been written in pencil on the back of the print. This seems to relate to Chapman's image numbering system that he used when on the British Mission to Lhasa in 1936-37. There also appears to a be a Chatto & Windus reference number (the publishers of Lhasa the Holy City , Chapman's book published in 1938). This is C&W 41074/18 [MS 19/1/2005]

Other Information - Related Images: Images prefixed with 'E.' seem to have been taken at the end of the Mission in February 1936 and on the return journey from Lhasa to Gyantse and beyond. They comprise a group of negatives containing images of Kundeling, Drepung, Gyantse, Karo La and Ralung bridge [MS 13/03/2006]

Other Information - Cultural Background: Local people and travellers would add prayer flags to these sites to propitiate local spirits and ensure the avoidance of misfortune [TS 20/1/2005]