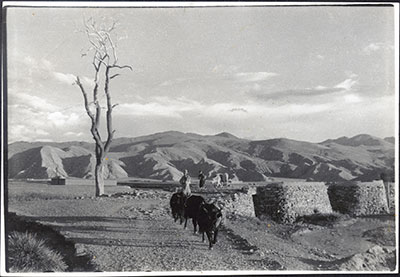 Notes on print/mount - The back of the print is covered with cropping and proof marks. '7a' is written in pencil in the top left hand corner The instruction is not to crop the image but to reduce it to 5 5/8". There is also some re-touching in the top left hand corner of the image, where two lines have been touched out to the left of the tree. The reference 'C-1-34' has been written on the back of the print in pencil. This seems to relate to the numbering system Chapman adopted for images taken on the British Mission to Lhasa in 1936-37 [MS 19/1/2005]

Manual Catalogues - Caption in Chapman's hand-written list of negatives made whilst on the Mission to Lhasa, 1936-7 [See PRM Manuscripts Collection]: 'Gyantse bridge. Evening shadows on hills'; PRM Manuscripts Collection: ‘List of Tibetan Prints and Negatives’ - Book 1, From Gangtok to the Natu La August 1936: ‘15/3 - Cows coming in to Gyantse over cantilever bridge’ [MS 13/03/2006]

Other Information - Related Images: Images prefixed with CI.34 seem to have been taken on the route to Gyantse and just at the point of arrival on August 12th 1936 and comprise a group of negatives containing images of Kala, Samada, Khangma [Kangma], Saugong, Gyantse, and Gyantse bridge. A hand-written note at the end of the list states ’Prints 2 1/4 x 3 1/4 in album’, referring to the draft album of photographs from which official photographic selections from the mission were made. This image has also been grouped by Chapman with others under the heading 'Journey up and Scenery' in his handlist. [MS 13/03/2006]