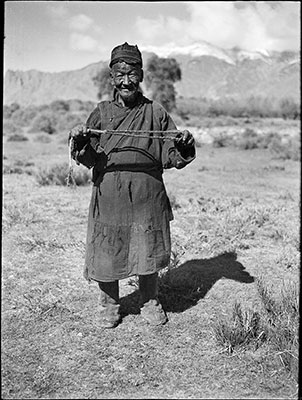 Tibetan shepherd wearing a chuba hitched up at the waist and felt boots. He is holding a rope sling, which would be used to control his flock. This is a full length portrait with the central figure in focus against a blurred background

Other Information - Related Images: The man in this image is the same as can be seen in 1998.131.200. Images prefixed with 'C.8.' seem to have been taken in October 1936, with this image datable to the period 14th - 17th October. They comprise a group of negatives containing images of Potala and Lhasa, officials coming through Pargo Kaling, Turquoise Bridge, Tsarong, Trimon, views from and of Sera, woman washing clothes, shepherd with sling, football teams. See also 2001.35.190.1 in the Nepean collection in the PRM [MS 17/1/2005]