Yaks and trader in Lhasa Valley 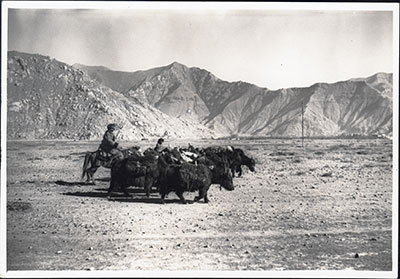 Yaks carrying loads and a man wearing Khampa dress made of sheepskin with a fur hat, riding on a pony. The dark border to his coat is made of fur. A young boy can be seen riding a yak in front of him. There is a pole standing upright in the ground in the right of the image. A settlement can be seen at the foot of the mountains in the background.

Notes on print/mount - "7-9" and "F.S.Chapman" have been written on the back of the print in pencil. This relates to the numbering system for images that Chapman used during his time on the Gould Mission to Lhasa in 1936-37 [MS 17/1/2005]

Manual Catalogues - Caption in Chapman's hand-written list of negatives made whilst on the Mission to Lhasa, 1936-7 [See PRM Manuscripts Collection]: 'Yaks and mounted Kamba' [MS 13/03/2006]

Other Information - Setting: Chapman wrote the following in relation to this image in the Mission Diary for the period stated: "Now that there is no grazing to tempt the pack-animals to dally by the way, and no rain to spoil their loads, there is much traffic on the trade routes. Any day you can see trains of mules, donkeys and yaks carrying the rough Tibetan wool down to India; and, approaching the city, loads of brick tea sewn in compact square packages, bundles of dried yak-dung for fuel, and striped yak hair bags of barley flour, which with the salt buttery Tibetan tea forms the staple diet of all the poorer classes." [MS 12/3/2005]

Other Information - Cultural Background: This image could be of a trader because of the number of yaks and the nature of the loads they are carrying. It is not clear for what reason there is a wooden pole standing upright in the right of the image. Although telegraph lines had been extended to Lhasa from 1923 onwards, this pole does not appear to be connected with any wires or to have spatially related to others in a system. The dark border at the bottom and around the sleeves of the man's coat is likely to be made of fox fur. Wealthy people might choose to have different kinds of fur, such as leopard skin to adorn their clothing [TS 20/1/2005]