Structure, La Tho, used to make offerings to spirits 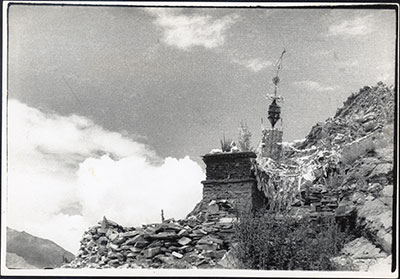 A structure, La Tho, for making offerings to the spirit of this place as a protection from misfortune situated near Yamdrok Tso. Structure built of stone with some wooden struts under the top stones. Surrounded by slabs of stone and rocks. Positioned on a steep hillside with mountains in the background. Prayer flags and khatak offering scarves suspended from the structure

Notes on print/mount - This is a facsimile print, according to the notes on the back of the print. The back of the print is covered with proofing and cropping marks, including the instruction "NB: Machine a little less black", "Touch out mark" referring to a mark across the stone structure which appears to have been touched out on the print, and to crop the image slightly on either side. The reference number 'C.P.12' has been written in pencil across the back of the print. This relates to the numbering system for images that Chapman adopted whilst on the Mission to Lhasa in 1936-37. [MS 17/1/2005]

Manual Catalogues - Caption in Chapman's hand-written list of negatives made whilst on the Mission to Lhasa, 1936-7 [See PRM Manuscripts Collection]: 'Ditto [Ghost scarer against sky] less up in air'; PRM Manuscripts Collection: ‘List of Tibetan Prints and Negatives’ - Book 1, From Gangtok to the Natu La August 1936: ‘“Ghost traps” on a ridge beside a pass to catch evil spirits’ [MS 13/03/2006]

Other Information - Related Images: Images prefixed with 'CP.' seem to have been taken en route to Lhasa in August 1936, particularly between Yamdrok Tso and Singma Kang Chung. Other images in Chapman's list identify this 'ghost scarer' as being sited near to Yamdrok lake. These images comprise a group of negatives containing images of the route to Lhasa including rock paintings, this ‘ghost scarer’, environs of Nyapsu La, Singma, boats on the Tsangpo, birds and flowers. The list is referred to as ‘P’ in Chapman’s papers, but all the images were prefixed ‘CP’ in the draft album and related prints in the Pitt Rivers Museum collection are also annotated as ‘CP’. However, they are different to those referenced as 'C.P' in the Mission Diary written by Hugh Richardson around the period 16th - 18th September, suggesting that a different system was initially in use [MS 13/03/2006]

Other Information - Cultural Background: ELABORATE thread cross . C hapman calls this a 'Ghost-trap to catch evil spirits' . These Thread Crosses Were Usually Constructed When Someone Was Ill Or Some Misfortune Had Struck A Family . Little Images Of Dough (representing Different Deities) Were Incorporated Into The Tread Contraption . A Lama Would Then Invoke The Evil Spirit Causing The Damage To Enter The Appropriate Image Where It Would Be Symbolically Trapped By The Threads . Then The Whole Construction Would Be Carried Away From The Village Where Misfortune Had Struck And Placed At A Specific Point (often A Crossroads) . Eventually, After The Bad Luck Had Ceased (or Sometimes Before) It Was Burnt At A Special Ceremony . [Marina de Alarcón ZF 1995.1]

Other Information - Cultural Background: This is La Tho for propitiating the spirit of this place. People hang prayer flags or khatak to appease the spirit. These structures are often built in places where accidents are likely to happen and may originate from simple cairns where people have placed rocks. The upright structures are associated with offerings that have been made to the spirit [TS 20/1/2005]