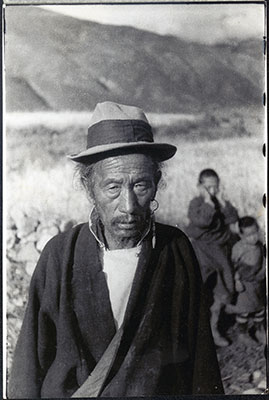 Portrait of a village headman with a long ear ornament of the kind only worn by officials, a felt hat and a cotton Tibetan shirt. The man in the centre of the image is in focus, whilst there are children in the background who are out of focus. The children appear to be standing against a stone wall with fields and mountains in the background

Notes on print/mount - "Village Headman" has been written on the back of the print in pencil, as has the number "34a". The back of the print is covered with crop and proofing marks and tracing paper has been attached to the print to transfer these annotations to the front of the print. Amongst the instructions on the back of the print is that the image should be reduced rather than simply cut, although it states "Cut a little if necessary". This is a different approach to that adopted on other images, where extensive cropping takes place. The effect of the reduction with the slight cropping indicated at the top and bottom is to slightly reduce the length of the image, whilst retaining the figures of children out of focus in the background. This is a different approach to that of 1998.131.193, where background figures are cropped. The reference number 'C.P.35' has been written in pencil across the back of the print. This relates to the numbering system for images that Chapman adopted whilst on the Mission to Lhasa in 1936-37. [MS 17/1/2005]

Other Information - Related Images: Images prefixed with 'CP.' seem all to have been taken on or around the 21st August 1936 and comprise a group of negatives containing images of the route to Lhasa including rock paintings, a ‘ghost scarer’, environs of Nyapsu La, Singma, boats on the Tsangpo, birds and flowers. The list is referred to as ‘P’ in Chapman’s papers, but all the images were prefixed ‘CP’ in the draft album and related prints in the Pitt Rivers Museum collection are also annotated as ‘CP’. This image was also collated with others under the heading 'Types, Nomads' in Chapman's lists of images [MS 12/03/2006]

Other Information - Dates: This photograph was probably taken on Friday August 21st, 1936 as it was on that day that the British Mission to Lhasa under Sir Basil Gould reached the village of Singma Kang Chung, en route to Lhasa, according to the official diary of the Mission. The man in this image can be identified as the Headman of Singma village by the caption for this image in the list of photographs taken on the mission in the manuscript archive of the Pitt Rivers Museum, Oxford University [MS 16/7/2005]