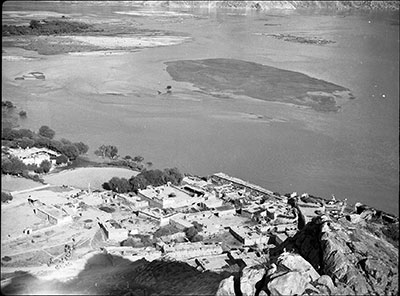 A photograph of Chushul taken from the dzong. Farmhouse roofs are visible and the Kyichu river can be seen in flood. A group of pack ponies seen in bottom left corner. Communal grounds for threshing visible on the left of the image and compound for keeping animals beyond that.

Manual Catalogues - Caption in Chapman's hand-written list of negatives made whilst on the Mission to Lhasa, 1936-7 [See PRM Manuscripts Collection]: 'Ditto [From Chusul dzong and valley] down onto Chusul and beyond ' [MS 12/03/2006]

Other Information - Related Images: All the images prefixed with 'C.11.' seem to have been taken en route to Lhasa at the end of August 1936 and comprise a group of negatives containing images of Chushul, including a panorama [MS 12/03/2006]

Other Information - Traditionally Tibetan houses would be built in square around a courtyard and many houses of this design can be seen in this image. Two large houses can be seen on either side of the field by the waters edge and these appear to be the two largest houses in the village. The river appears to be in flood because trees are visible in the middle of the expanse of water [TS 20/1/2005] [MS 20/1/2005]