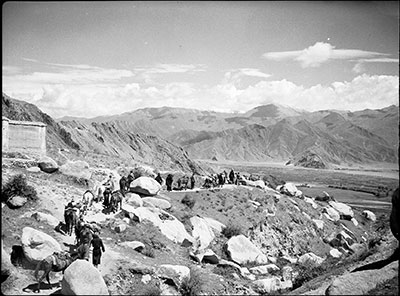 The British Mission party descending into the Lhasa Valley following an official visit to Drepung Monastery in August 1936 en route to Nechung. A party of porters and ponies can be seen on the cliff path. They are moving in a long line with a great many ponies in the group. All of the ponies appear to have European-style rather than Tibetan saddles. Those leading the horses are wearing a variety of costumes, including one man who is wearing the dress of a servant of a Tibetan official with a distinctive round, tassled hat; another is wearing a solar topi. The corner of a building, probably a part of Drepung, can be seen on the left hand side. A view of a plain is visible beyond the path with mountains in the background

Manual Catalogues - Caption in Chapman's hand-written list of negatives made whilst on the Mission to Lhasa, 1936-7 [See PRM Manuscripts Collection]: 'Our party coming down from Drepung' [MS 12/03/2006]

Other Information - Setting: "Being Sunday Gould had arranged to have a rest from visitors and arranged a visit to Drepung Gompa, the biggest gompa in Tibet or in the world for that matter. ... The gompa is like a great town on a steeply rising hillside 5 miles out of Lhasa and the numerous buildings, halls and temples rise perforce in terraces with steep alleys and steps between. ... We then proceeded to the "Nachung" or temple of the Great Oracle of Tibet, a mile from Drepung Gompa, where we had a pic-nic lunch under a grove of trees at which we entertained our Tibetan guides and our own clerks, who had accompanied us to Drepung, much to their delight" ['Lhasa Mission, 1936: Diary of Events', p.7, written by Philip Neame] [MS 12/03/2006]

Other Information - Related Images: It has been possible to identify this image because of the number printed on the bottom of the negative. It relates to the group of images prefixed 'C.2.' which comprise a group of negatives containing images of the treasurer, a panorama from Drepung, views from Sera and Nechung monastery. They seem all to have been taken on August 30th 1936 [MS 12/03/2006]

Other Information - Cultural Background: All of the ponies appear to have western-style saddles rather than Tibetan ones, which are raised at the front and back and made around a wooden frame. Many of the group leading the ponies are wearing distinctive clothing accessories, such as solar topis and one is wearing the tasselled round hat of a servant of a Tibetan official. This, and the size of the caravan suggest that the image may have been taken en route to or from Lhasa in either August 1936 or February 1937 [TS 20/1/2005] [MS 20/1/2005]