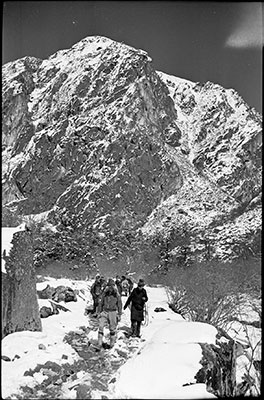 A group of people leading ponies along a path, probably descending the track into Gautsa village. There is a European man at the front of the group whilst the rest follow on behind. There has been a thick fall of snow. A small child can be seen riding the first horse in the column. Steep mountain sides can be seen in the background

Manual Catalogues - Caption in Chapman's hand-written list of negatives made whilst on the Mission to Lhasa, 1936-7 [See PRM Manuscripts Collection]: 'Party descending track to Gautsa' [MS 12/03/2006]