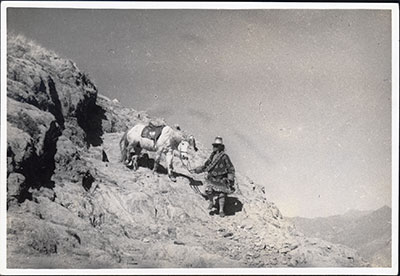 This photograph seems to be of Iamtso, Chapman's groom or syce, leading Chapman's horse Marpo down a steep cliff path. Iamtso is wearing a decorated woollen coat or chuba, trimmed with fur. He is also wearing western-style socks and shoes. The pony has a European-style saddle. Higher mountains are visible in the distance in the right of the image

Biographical Information - Iamtso was Chapman's groom or syce . He accompanied Chapman on the Mission to Lhasa in 1936-37 and was responsible for looking after Chapman's horse, Marpo, and helping to transport his camera equipment. It is possible to identify this as Iamtso from Chapman's hand-written list of negatives used on the Mission to Lhasa in the Pitt Rivers Museum archive in which 'B.I.19' is referred to as 'Iamtso and pony on cliff path'. [MS 27/6/2005]

Other Information - Dates: This image was probably taken between 7th-9th January 1937 when Chapman went on a brief excursion outside Lhasa to photograph nomads. He had a tendency when on these trips beyond the control of the other Mission members to go as far as he could, sometimes missing appointments and disappearing for many house. The number ascribed to the image would fit with other images with a 'B.I.' suffix illustrating the Mission Diary taken in early January. In a letter to his parents on May 25th 1937, when Chapman was attempting to climb Mount Chomolhari after leaving the Mission, Hugh Richardson wrote: "[Chapman] has failed to turn up to time from his climb on Chumolhari [sic] . I hope nothing has happened to him. He is very casual and on several occasions here we had to send out to look for him and found that he had forgotten the time or gone too far but Chumolhari is rather a different proposition” [Hugh Richardson Archive, Bodleian Library, University of Oxford, MS Or Richardson 3 folio 111] [MS 12/03/2006]

Other Information - Travel: The saddle is a modern European one which is much lower than that of a more traditional style Tibetan saddle, which are made from a wooden frame with a higher back-rest and raised front. The syce is also wearing what appear to be western-style (possibly army issue) socks and shoes [TS 20/1/2005]