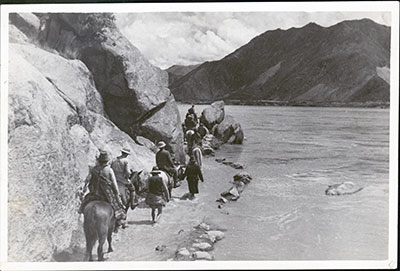 The British Mission party on a path flooded by the Kyichu river near Nyethang. The path is following the Kyichu river on the route from Gangtok to Lhasa. Water from the flooded river is flowing onto the path forcing the caravan to walk very close to the rock face on the left. Developing storm clouds can be seen in the distance. The last horseman in the group is wearing a distinctive tie-dye textile and fur coat or chuba, which was typical of those worn by Sikkimese attendants and grooms or syce on the British Mission. More than fifty horses and ponies accompanied the mission to Lhasa in 1936. The British Mission members are being led on horseback by assistants. A mantra or religious recitation has been inscribed on rock face on left of image

Notes on print/mount - The print is covered with crop mark annotations. It also states "Where the Brahmaputra had flooded the path", "4 Proofs" and "Fit up flush for caption at base". There is also an instruction to crop the image at the top, which reduces the amount of mountain/cloud referent in the image and centres the group on horseback. The number 'CH.A.33' has been written in the top left corner of the back of the print. This seems to refer to the number given to the image by Chapman in the Diary of the Mission. This number would correspond with entries for Sunday August 23rd 1936 [MS 14/1/2005]

Manual Catalogues - Caption in Chapman's hand-written list of negatives made whilst on the Mission to Lhasa, 1936-7 [See PRM Manuscripts Collection]: 'Submerged track near Chusul' [MS 12/03/2006]

Contemporary Publication - This image was used to illustrate the official Mission Diary entry for Sunday August 23rd 1936. Philip Neame wrote of this part of their journey to Lhasa: "We had a long and tiresome journey of 23 miles slow in places owing to flooded track, and to steep climbs up and over the bluffs against which the river swirls in places. It was quite hot but with a pleasant breeze near the river. The Kyi-chu or river of Lhasa is a broad flood at this time of year, and in others narrowing and flowing rapidly against the bluffs and cliffs".

Other Information - Historical Background: The caption written on the back of the print, 'Where the Brahmaputra had flooded the path', is clearly intended to be a popular caption to make the image readable to a home audience. Netang is on the Kyi-chu River, which is a tributary of the Brahmaputra, but not part of the main Brahmaputra River itself. There had been a significant discourse in British explorer narratives from this region, particularly since the late eighteenth and early nineteenth centuries, concerning the origins of the Brahmaputra River, the quest for which had become the equivalent of finding the source of the Nile in an Asian context. The name 'Brahmaputra' was therefore highly evocative in British geographical circles and popular narratives of imperial 'discovery' and lent the image (and thus the Mission and the photographer) a certain kudos by its assimilation to these historical constructs. That this caption was intended for popular consumption is suggested also by the fact that the caption for the image in the official Album of the Mission refers to this river as the Kyi-chu [MS 21/2/2005]