Ruins of fort near Chushul, view of Kyichu valley 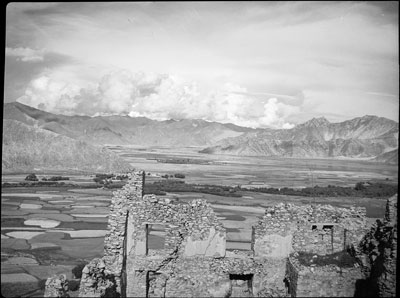 View over Kyichu valley from a ruined dzong or fort on the hill near Chushul. There is a settlement in the centre of the valley in the middle distance and others can be seen dotted around the valley. Cultivated fields are visible in the foreground below the ruins. Higher mountains are seen in the distance with clouds touching their peaks. The plaster-work that would have covered the walls of the dzong has fallen off in most places, revealing the stonework structure and wooden lintels above the window apertures.

In Negative - A piece of the negative has been torn off on the right hand side. This seems to occur with this particular film negative type in Chapman's Collection. The number '7' has been printed on the negative on the left hand side [MS 14/1/2005]

Manual Catalogues - Caption in Chapman's hand-written list of negatives made whilst on the Mission to Lhasa, 1936-7 [See PRM Manuscripts Collection]: 'Ditto [From Chusul dzong and valley]' [MS 12/03/2006]

Other Information - Dates: This image was taken from the hill above Chushul as it can be related to other images taken from this location identified in the handlist of Mission photographs, compiled by Chapman at the time and in the archive of the Pitt Rivers Museum [see CHA.35, .36 & .37]. This enables the image to be dated as 22nd or 23rd August 1936 as it was on those days that the Mission travelled from Chushul to Nyethang. The lush vegetation in the valley and the developing storm clouds also indicate that this photograph would have been taken in August or early September 1936 [MS 25/6/2005]

Other Information - Related images: This image is closely related to 1998.131.709. Both images are taken from inside the ruins although at slightly different vantage points [MS 14/1/2005]