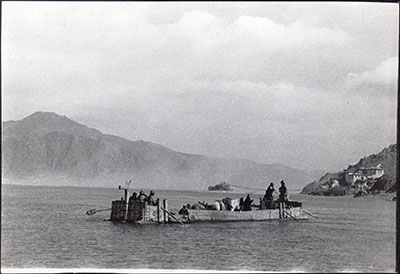 Notes on print/mount - The back of the print is covered in annotations and crop marks. The instruction 'Bring out suspension bridge' is written in pencil on the back across the bottom. This probably refers to the fact that the line denoting the bridge has been drawn on by hand. Other annotations on the back of the print, including '4b' in the top left hand corner. It is indicated that a crop should be made on the left hand side of the image (26mm). This would de-centre the ferry in the image, but would reduce the extent of presence of water and mountains on the left hand side of the frame. The reference number 'B-D-6' has been written in the centre of the print on the back. This relates to the numbering system adopted for photographs taken during the Mission to Lhasa in 1936 [MS 14/01/2005]