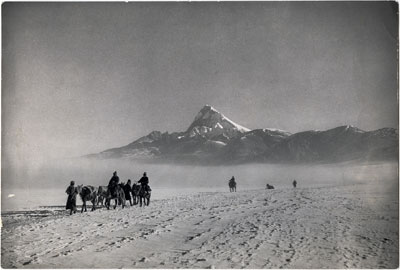 Chomolhari at dawn with British Mission party and syces riding in foreground. Travelling between Phari and Gautsa on the return journey from Lhasa

Notes on print/mount - There are a number of inscriptions on the back of the print, most significant of which is 'O.H.10', which is the reference number used by Chapman [MS 10/03/2006]

Manual Catalogues - Caption in Chapman's hand-written list of negatives made whilst on the Mission to Lhasa, 1936-7 [See PRM Manuscripts Collection]: 'Cut at full [sun?] Chomolhari at dawn and party riding'; PRM Manuscripts Collection: ‘List of Tibetan Prints and Negatives’ - Book 1, From Gangtok to the Natu La August 1936: ‘10/1 - Our party leaving Phari for Gautsa in March 1937. Chomolhari (24,000) in background’