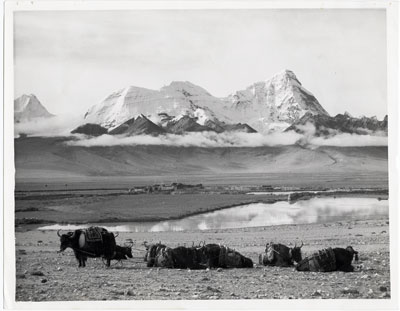 Notes on print/mount - The back of the print is covered with a variety of editorial and publisher's markings, apparently added at different times. Of particular note are the identification of the image as 'C.10.7' and the caption 'Northern face of Chomolhari (the peak on right) from Tuna rest house'. Both of these are written in pencil. In red pencil an instruction as been given concerning the reproduction of the image: 'NB: Please fill in sky in top corner. Cut fraction of black object in bottom corner'. A piece of transparent paper has been attached to the back of the print for transferring cropping instructions to the front. The comment 'Lhasa. Transferable?' has also been written in pencil. This may refer to the fact that, although this image was taken as part of the British Mission to Lhasa, it might also be appropriate for a later publication relating to Chapman's subsequently successful climb of Chomolhari in 1937 [MS 10/03/2006]