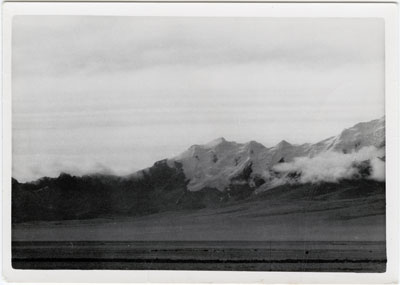 Notes on print/mount - 'CG.34' has been written on the back of the print in pencil, as has 'F. Spencer Chapman' apparently in Chapman's own hand. In addition 'Pan + 33, 32, 31' has been written in pencil, identifying that this image was originally part of a multi-shot panoramic view [MS 10/03/2006]

Other Information - Related Images: Images prefixed with 'CG' belong to a group of negatives containing images of Phari, Chomolhari, Dr Tunyip, Phari Dzongpen, Tuna, telephoto panorama of Chomolhari apparently taken on August 5th and 6th 1936. A hand written note at the bottom of the list states ‘2 1/4 x 3 1/4 gone to album', meaning that they had been selected for inclusion in the draft album, from which official selections of photographs of the mission were made. This image forms a panorama with CG.31, CG.32 and CG.33 [MS 10/03/2006]