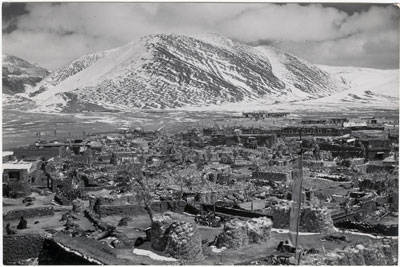 View of Phari taken from the Dzong with snow on the surrounding hills. The dak bungalow, where British officials would stay when travelling, can be seen in the middle distance on the centre right of the image, standing just outside the main town. Tremo La can be seen on the left, one of the main passes into Bhutan

Notes on print/mount - 'O.H.7' has been written on the back of the print in pencil, apparently in Chapman's hand. The caption 'Phari Village' has also been written in large letters across the back [MS 10/03/2006]