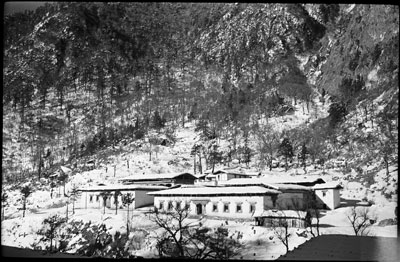 Other Information - Description: Philip Neame wrote a brief description of the Mission's first encounter with this site when they travelled to Lhasa in August 1936: August 4th - "A couple of miles further on [from Lingmathang] we passed quite a remarkable collection of buildings on one of which was a big water wheel, this used to be the Tibetan Government mint, where paper was made, bank notes printed, and also coins struck. It is now out of use; one understands that the Tibetan Government prefer their mint nearer at hand in Lhasa where they can keep an eye on it" ['Lhasa Mission, 1936: Diary of Events', part II] [MS 10/03/2006]