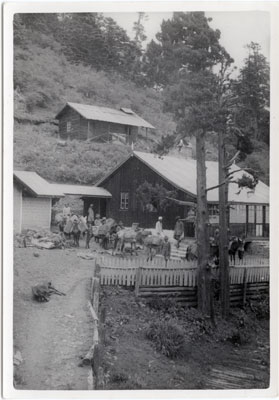 Champithang Bungalow en route to Lhasa. A group of people and mules can be seen outside the bungalow. This was a resting place for the Mission members and their porters

Manual Catalogues - Caption in Chapman's hand-written list of negatives made whilst on the Mission to Lhasa, 1936-7 [See PRM Manuscripts Collection]: 'Champithang Dak B. [Bungalow] upright’ [MS 08/04/2006]